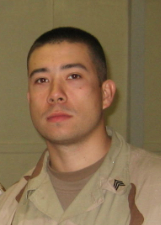 The Importance of Accepting What is In Front of You

It was on September 11th, 2005 that Army Sergeant So thought for sure he was going to die.

For it was in the middle of the night while camping out with the 20-man infantry unit he was supporting in Eastern Afghanistan that they were ambushed.

No sooner had the hailing bullets stopped when his commander gave Sergeant So the dreaded order, “Clear the field.”

In the pitch black.

Since his commander did not know how many casualties the enemy sustained, he needed Sergeant So to find out and report back.

So could not refuse his commander’s order.

And so he accepted his fate.  Soon the field was successfully cleared.

Last week I met Shaun So.  We both were guest speakers at the Manhattan Chamber of Commerce’s Veterans, Do You Want To Start Your Own Business? event.  I was speaking about finance options for Veterans interested in being entrepreneurs.

Shaun was speaking on a panel of ex-military entrepreneurs.  They shared their stories of being in the military and how they successfully transitioned to starting their companies.  Shaun’s panel explained what they learned from their military training that helped them start and run their businesses.

And Shaun has been successful as an entrepreneur.  He just sold a major part of his current company while simultaneously launching his new company, http://www.venturelaunchlab.com/

When speaking recently with Shaun, I asked him what was the main thing he got from the military that he now uses in business.

Immediately he replied, “Accept what is in front of you.”  Then move it forward and never look back.

Today Shaun trains entrepreneurs and senior management of companies on various strategies like this that he has learned the hard way:

Having a hard time “taking the hill” in business?  Thinking it is not possible?  Complaining why it needs to be so tough?

Or why it needs to be done at all?

The reason is because nothing of any significance gets done with out real focus and effort.  Otherwise you would have done it already.

Consistency in doing the hard things is the key to success in business.  Almost anyone can run a business when things are easy and going well.  But that is not most of the time.

Successful entrepreneurs, however you define success, are the ones that are consistent in getting key things accomplished.  Especially those things they do not like doing.  And those are the tough ones for most entrepreneurs.

Yet it is these successful entrepreneurs that accept those tasks in front of them and do them in a consistent basis that are much more likely to be successful in business.

So whenever that little voice in your head starts yammering on about how you don’t want to do X or Y, just say, “Thank you for sharing, now step aside, I have work to do.”

And then go clear that field!

What have you been resisting in your business?  That key part of your business that you just hate to deal with?

Managing finances?  Dealing with upset customers?  Figuring out your next marketing strategy?

How has that procrastination been working for you?

Perhaps it is time to step up and give yourself a clear and measurable goal around that procrastinated task.  Then set up a support structure to get it handled.

For example, outsource it.  Delegate it.  Get a virtual assistant.

Sometimes it is best to remind yourself of your company’s vision and the purpose of what you are doing.  And the importance, and impact, of the task you have been delaying get done.

Once you put things into perspective, it usually makes it much easier to just get it handled.

Do this and you may surprise yourself how great you feel and the results you see.