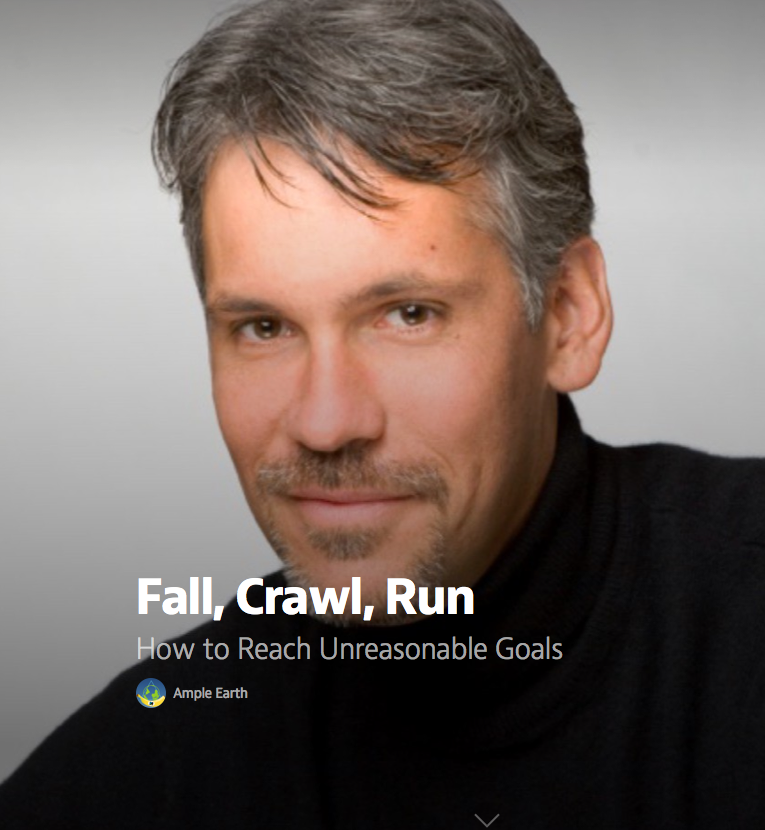 My First Unreasonable Goal: From Coma to Running in Central Park Within 90 Days

Stefan Doering was crossing a busy Brooklyn street when he was hit by a man in a car. He careened backward and smashed the back of his head on the pavement. An ambulance ride, a skull fracture, a coma, and three weeks of memory loss later, Stefan found himself in a muted world, seeing double, and learning to crawl. “Here I am thirty eight,” Stefan remembers “and my two year old niece is going no Stefan. This is how you do it! It was humiliating and embarrassing and frustrating. Weeks before, I was running seven minute miles, five miles a day, in Brooklyn’s Prospect Park.”

In spite of professional opinion—that he may never walk again—Stefan got this unreasonable idea.

He wanted to run five miles in Central Park within ninety days.

Shortly after his accident, Stefan went to a mastermind group he co-created to help him develop and pursue this unreasonable goal. The job of the mastermind group is to support the process of accomplishing goals, thereby acting as a powerful support system. Stefan got frustrated a lot—but every time he fell and was ready to give up on his dream of running again, they were there supporting him and helping him deal with obstacles.

Stefan is a serial entrepreneur—having started and run seven companies in thirty-two years. What inspired his sixth venture was this near fatal accident that left him nearly blind, deaf, and unable to walk. Stefan now helps entrepreneurs achieve their own business goals by the same means in which he ran those five miles. He combines a hard earned wisdom of patience, discipline, and optimism with years of business savvy. I recently e-sat down with Stefan, founder of Best Coaches Inc., to see if I could get him to share some of his trade secrets. Today, Best Coaches Inc. has reached over three thousand entrepreneurs and hundreds of green businesses in thirteen countries.

I was interviewed by Ample Earth, whose mission is to create stunning animated videos, propelled by viral marketing strategies, that tell the world about stories that matter. We talked about how to meet unreasonable goals.

It is one of the best interviews written about me in thirty years.

Ample Earth: Did your accident change how you perceive the world?

Stefan Doering: When you can’t see and you can’t hear—when you can’t walk—you’re left to your own devices of thinking. I remember lying in bed in so much pain that it took me half an hour to turn from one side to my back. I started listening—listening to my own dialogue.

My runs were long and agonizing, a forty-minute mile pace accompanied by frequent, disheartening falls. As it happened again and again, I came closer to not getting back up to run, to giving up and going home. I got to this point where I said to my mastermind group, “Guys, I can’t do this. I can’t even run half a mile. I keep falling.”

My inner dialogue was not a unique one. In fact, as we approach our goals and step into challenges, this dialogue is quite common:

I continued to fall—came closer to giving up. One day at a mastermind meeting, one member asked, “Stefan, why are you running?” So I composed a list full of reasons why I should run.

“I want to prove my doctors wrong, I could run a seven minute mile before, I want to…”

My friend, unconvinced, asked again. “Stefan, why are you running?” So the list grew and grew.

He asked me a third time. “Stefan, why are you running?” I had nearly exhausted the list. But then came reasons entirely different.

It changed and shifted the meaning of why I was doing what I was doing. A funny thing happened when I did that. I started to run. Instead of watching the clock, it didn’t really matter anymore. It became a powerful lesson.

AE: As a member of a mastermind, what is a constructive response to another’s failure?

SD: If you’re pursuing unreasonable goals, then you’re bound to get knocked on your ass a lot. That’s the nature of it. What’s going to get you back up is what comes from your heart. If it comes from your head, it’s too easy for you to stay on the ground, because of this tendency to rationalize.

With each endeavor, there will be obstacles. The bigger the endeavor, the bigger the obstacles. It is your system to deal with obstacles that determines how you proceed. One of the primary factors is that you’ve chosen a goal that resonates with who you are. Your goal should align with your core values. Too often, people go after what they think they should be going after. It seems to make so much sense, and to begin there’s a lot of excitement, but when they encounter an obstacle, it becomes difficult to get up, to keep going.

A mentor of mine once called me a ‘naive optimist’. At first I thought ‘a naive optimist? That’s harsh! Then I realized that it’s true. I am. My second business was an environmental retail store—the second in the country. I told myself ‘how hard could it be to have a retail store? You put stuff on the shelf and sell it!’ It turned out to be a very complex business model. Seven years after its inception, I was still figuring out the logistics. If I had thought it all through first, I never would have started it. It’s called the ready, fire, aim business model.

Now I sport a naive optimist badge. It was crazy to make this goal of running five miles when I could barely see or hear, let alone walk—but it was this unreasonable goal that propelled me to accomplish something greater than I would have otherwise.

AE: I admire that your work is so full of determination and perseverance, but is there ever a time to reevaluate? When do you change path or say enough is enough?

SD: When I wanted to run, my mastermind broke it down into steps. By week 1…By week 2… By Week 3… We go through this same process with entrepreneurs. We help them to define what that unreasonable goal is. Then, we go through a one year, three year, five year goal. We break each year into something more manageable. This creates milestones, or checkpoints to look at how realistic their goal is. You define the goal and redefine it. At each milestone you adjust, again with the opportunity to redefine. The model must be flexible because it all comes back to that one word: obstacles. It is the obstacles that define our paths.

We employ these five pillars—crystal clear vision, intense determination, smart strategy, a system to deal with obstacles, and a powerful support system, and tailor them to each individual’s unique unreasonable goal. The result is a system that is simultaneously thorough and flexible.

AE: So it seems like this concept of failure is central to what you do.

SD: When I look at virtually all successful business people, I see that their success lays on a foundation of failures. Most of the time, their biggest successes come right after their failures.

One of my most important lessons in obstacles comes from my angel investor. An angel investor is someone who not only provides the initial capital to start a business, but also rolls up their sleeves to help you built it. Mine happens to be a friend and mentor—my soccer coach when I was twelve years old.

I asked for my angel investor’s financial support in starting my second company. He gave me three hundred thousand dollars. I failed. The company went bankrupt.

Because I am a serial entrepreneur, it was only a matter of time before I had another idea. I ran this new idea by my angel investor, just to hear his opinion. To my surprise, my angel investor wanted to invest again. I was baffled. ‘Me? I just lost hundreds of thousands of your dollars!’ He just replied that he’d be a fool not to invest again. Otherwise all of that money that he put into my previous company would have been wasted. That first try? Investing in my education. If you give up, he told me, that’s failure. If you don’t give up, that’s just set back.

AE: There’s this whole generation of kids who both want to make money and do something good for the world. Are they just idealistic? What’s the intersection of having a successful business and being socially responsible?

SD: The younger generations—the Ys, the Xs, the millennials—are redefining that intersection. The corporations know they must change their tune if they want the younger generation to step in. As a result, corporate social responsibility has picked up quite a bit.

There are five stages a company’s awareness goes through. Stage one: the company says they don’t give a rat’s ass. They say, “I’m only here to make money.” Stage two: “Yeah, yeah, I get it,” they say about the environment. “But I’m here to make money, so let’s stay focused.” Stage three: The company realizes that they care about the environment, but the question remains “where do I get started?” Stage four: “Now we’re actually making money by caring about the environment.” They realize that if they take greater care it will equate to even more money. Stage five: The opposite mindset of four. “Let’s make money, so that we can do more for the environment.” While there are few companies in stage five, more and more companies are entering the third stage.

Ray Anderson, the author of Confessions of a Radical Industrialists, is considered one of the pioneers of the business model that many corporations follow today. He redesigned his carpet manufacturing company, one of the most polluting industries in the world, to follow a business model greater than one so single minded as to only care about profits.

There’s a new concept that is fifteen or twenty years old called the triple bottom line. The industrial revolution was all about a single bottom line—that is to maximize profits at any cost. This is a broken business model. When you only focus on profit you don’t focus on the impact on people or the environment. People are your stakeholders, and they include investors, employees, and the community. The new business model, the triple bottom line, is this: people, planet, profits. To sustain ourselves long term we cannot neglect people and planet just to make profits. Think of it as burning your house down to make a fire. Whether you have a “green business” or not, you need to consider the impacts greater than your immediate profit.

I asked Stefan whom he would select for his mastermind, if he could choose three people from any time in history.

I laughed to myself. Here comes the copout. I have the perfect mastermind, I mimicked in my head.

“Of course, I would select Abraham Lincoln,” he continued. Now I was intrigued. “And to complement him, Ulysses S. Grant, because do you know what a brilliant mind he had to win the war for the north in the American Civil War?”

He had one more choice. He didn’t hesitate. “Napoleon Hill.” Author of Think and Grow Rich. The man who spent the better part of his life interviewing the twentieth century’s most successful entrepreneurs.

“And you know what he found?” Stefan quizzes me.

That for all these things we just talked about, they were the best in the business. Rather than fixating on an outcome, they formed a constructive response to each obstacle. They engaged in the process. After that nth fall, they were the ones who kept running.

Read more about my journey in the original article here, and if you’re ready to make your own unreasonable goals a reality, sign up for a free 45 minute consulting call.