Highly successful entrepreneurs think differently than most entrepreneurs. Here is how to make sure you don’t psyche yourself out along the way to building your incredible company. 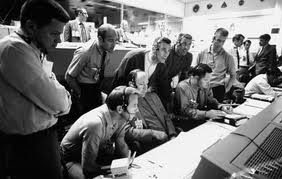 Failure is Not An Option

On my way to a meeting yesterday here in New York, I was on the subway platform watching a little boy with his mom.  The boy must have been about 1 years old and was spitting distance from walking on his own.  He stands and can waive his hands and yell without falling.  I’m sure it is a matter of days now.

And it was a reminder to me that kids at that age do not know what failure is.  When he falls, or bumps his head, he just simply gets back up and tries again.  And again.  Failure is simply is not a part of his vocabulary.

And in watching him relentlessly try to get his little legs to support his body weight, it reminded me of the key elements people must have in order to step into greatness.

Over the years with all of the leaders, entrepreneurs and team builders I have worked with, I have been quietly asking myself what makes people extremely successful.

And I have found the following three key elements to achieving greatness:

1.  Think Outside The Box— hugely successful people thrive in living outside their comfort zone, which is how they got where they are.

Think about people we all admire: Mahatma Gandhi, Martin Luther King JR, John F. Kennedy, Barack Obama and many others.  Imagine if they said, “Nah, this is too risky.  I am not going to give this speech to those people!”

Rather, in the face of whatever circumstances they had to deal with, they thought beyond their comfort zones.  And the further out they went, the greater the outcomes.

A great example of using powerful questions is in the movie Apollo 13 with Tom Hanks.  In 1970, the Apollo 13 spaceship had some serious difficulties on its way to the moon.  And many thought the astronauts were doomed.

At mission control, the attitude of the director (played by Ed Harris) was different.  He asked the simple and powerful question to his rocket engineers, “What is the best way to get these men home safely?”

And by framing the question in this way, he shifted these incredible engineers’ thinking.  A funny thing happens when you ask yourself a powerful question, your mind goes to work on answering it.

I can’t tell you how many problems people solve just by changing the questions asked.

Instead, focus on what you want to accomplish, not what you don’t want.

3.    Know It Is a Done Deal— hugely successful people know it is their inner-strength, confidence and guidance from the universe that leads them to greatness.  They understand when they are convinced they will be extremely successful, it becomes a reality.

A key line in Apollo 13 was after Ed Harris asked the engineers for the best way to get the astronauts home he added, “And gentleman, failure is not an option.”

And as history shows, against unimaginable odds Apollo 13 and the crew landed safely.

The cool thing is you can have a constant reminder of these elements, i.e. the little boy on the subway platform.

By constantly thinking outside the box and finding new ways to stand and test his legs, trying new solutions to his question of how best to walk, and his knowing it is a done deal, there is no doubt very soon he will be walking.

And just as that little boy continues to step into his greatness, so will you when you use these three elements.

After all, failure is not an option.

Action Steps for the Week:

Take a look at where you are holding yourself back.  What do you tell yourself?  What questions do you ask yourself (or others)?

Are they empowering you?  If not, rephrase them in a way that gives you powerful solutions that serves you.  Think beyond what you feel is possible.