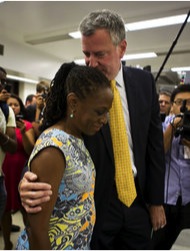 This morning I did my usual routine of going to the gym.   Except it was anything but usual.

Here I was, on the stationery bike, doing my normal intense 30-minute ride, so engrossed in beating my previous time on the bike that I didn’t notice the two people in business suits standing there.  Nor did I notice the guy biking next to me.

That is, not until a woman, whom I recognized, paused in her workout and walked over to the guy next to me and started talking to him.  It was his wife.

The guy was Bill de Blasio.

After our short but pleasant conversation, I could not help but be impressed.  Here was the man most likely to be the next Mayor of New York City, sweating and puffing his way through his workout while his wife did the same thing ten yards away in a regular gym near where they live.

How incredibly different than Mayor Bloomberg.

Bill de Blasio is ahead of his Republican rival by what most experts feel will be a record in NYC politics, come next Tuesday’s election.

After this morning, it became obvious to me why.

And while there are many other factors involved in running a successful campaign, it is his key selling point.  He understands mainstream New Yorkers because he is one himself.

In business, if you are not a customer of your own product or service, it makes things 10 times more difficult to achieve success.

A good example of this is Mayor Bloomberg’s own reelection campaigns.  While he has done a lot for this City in the past 12 years, it was very difficult to actually like him as a mayor.  To this day, after all his contributions, polls show he is, at best, considered mediocre in the public’s eye.

In fact, he barely won the last election, after spending a record amount of money in a NYC mayoral campaign.

Again, not impossible to be successful, just much more difficult if you’re not one of them.

As entrepreneurs we all know the best way to sell to customers is to be one.  Why is it then that very few of us actually are?

Their pitches invariably come across inauthentic, uninspiring, and otherwise “flat”.

Many people sell things they don’t use themselves.  Nothing wrong with that.  It is just far more difficult.

This is because no one can sell your company better than you.  And if you don’t use your own product or service, it is difficult convincing others to.

And that is the secret to selling effortlessly.

If you at all doubt this, just ask the man who, against all odds, is most likely to be our next Mayor of New York this coming Tuesday: what had him be successful.

Most entrepreneurs who sell effortlessly and successfully are those who are passionate about their product or service.  Who believe in it.

Most likely this is because they use it themselves.

If you are not passionate and you find your energy waning around selling your product or service, check in with how you feel about using it.

Most likely both are directly correlated.

To change this you can study those that are successful selling what you sell.  What is different?  How can you emulate them and keep your own voice?

Next, create a game plan for making this shift and most likely you’ll see your sales shift right along side.